(1886-1940)   Gerda Wegener was a Danish illustrator and painter, specializing in images of fashionable women in the style of Art Nouveau and later Art Deco. Her first spouse was a trans woman who became her favorite model under the name Lili Elbe. Elbe herself was one of the first people to undergo gender reassignment surgery. Their story formed the basis for David Ebershoff's bestselling novel The Danish Girl, later adapted as a film.

At the Mirror cross stitch pattern 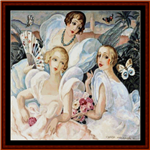 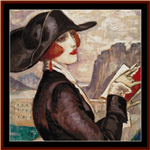 On the Road to Ana Capri cross stitch pattern